The Best Highlights From Week 2 and Week 3 Preview 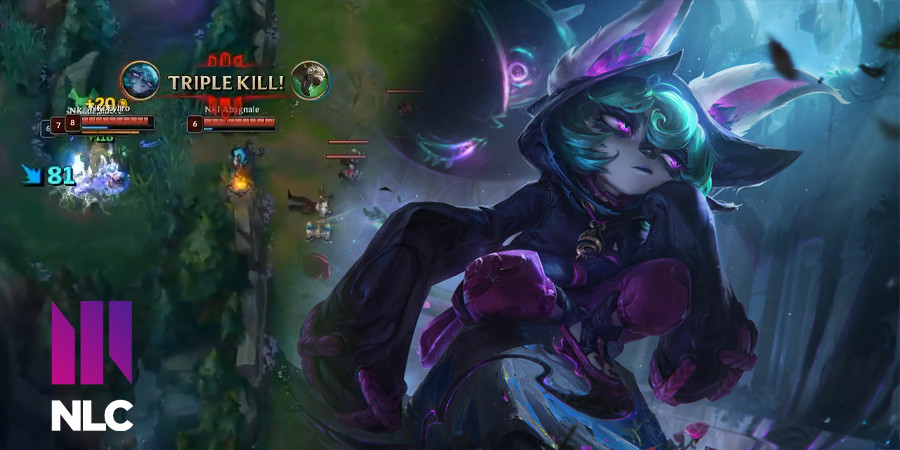 posted by Jacob Hancox,
Week 2 of the NLC Division 1 Spring Split had plenty of major highlight moments. Here are just a few of those, as well as a small preview of what's to come in week 3! Week 2 of the NLC Division 1 spring split has come and gone, and we now have a clearer pecking order among the teams. However, what we're interested in here are the highlight moments that either swung a game in one team's favour or allowed a team to temporarily flex their muscles against stronger opponents who they would end up losing to. A word of warning: if you aren't a fan of Vex, most of these highlights might not be for you! Without any further ado, here are some of the best highlights and biggest outplays from week 2 of the NLC Spring Split.

After a slow start to the split from MNM Gaming, they had the far-from-envious task of taking on the as yet undefeated Astralis Talent team for their first game of week 2. However, the MNM we saw on summoner’s rift that day was a whole different version of the team, as they proved to be more than a match for Astralis Talent in the early game. Around 25 minutes into the game, Astralis Talent fought back by winning a teamfight and immediately securing the Baron off the back of it. However, the Danish roster didn’t manage to make a clean getaway. Midlaner Chres was chased into the toplane by two members of MNM, and it seemed that he was not long for this world. And then this happened.

The penultimate match of week 2 was an intriguing prospect, as two teams who were looking to solidify their position as a top 4 team in the NLC in the forms of Bifrost and Vanir locked horns. In the early running, things generally went the way of Bifrost. As the clock ticked over to the 17 minute mark, a teamfight broke out in the middle lane. At this point, Bifrost had a 3.5k gold lead in their back pocket, but the victory wasn’t yet assured. However, Furuy made sure to put the game beyond any reasonable doubt.

Furuy wasn’t the only player to pull off a quadra in our second week of games. Zamulek, the bot laner for JDXL, was found himself separated from his team as a skirmish began between the two teams around the dragon pit. NYYRIKKI were at quite a deficit, but the fact that Zamulek was nowhere near the rest of his team gave them an opportunity to claw their way back into the game… or so they thought.


NYYRIKKI Claps Back against X7

In what was supposed to be one of the most one-sided matchups of the week, NYYRIKKI found themselves up against the goliath that is X7. To start with, things went more or less as expected, with X7 earning themselves a goal advantage which was just shy of the 2k mark. After forcing NYYRIKKI’s Azitor to recall, X7 went for an aggressive dive in the bottom lane. However, Eyhro became one of many players in week 2 to show the NLC what Vex is capable of, and with the help of de sidere and Abagnale, NYYRIKKI repelled the assault in style.

Vanir has been one of the surprises so far this split, as they leapt out of the gates to a 3-0 record. However, their relatively easy schedule had some doubting their status as a truly top team. Such doubts were only exacerbated in their most recent game where they fell at the hands of Bifrost in their first major challenge. Now, up against JDXL who many fancy as the second best team in the NLC, they have the opportunity to redeem their image as a member of the Elite 4. Fail to do so, and Vanir stocks will fall faster than you can say ‘strength of schedule’.

Heading into week 3 of the NLC Division 1 Spring Split, Astralis Talent is one of the most intriguing teams to watch. Having started strong, they faltered big time in week 2. On day 1 of week 3, they have a tough matchup in the form of Bifrost, who are looking like the third best team in the league at the moment. If Astralis Talent lose to Bifrost, they will be sitting at a negative win to loss ratio, something which few would have expected of this lineup heading into the split. As for Bifrost, a win would go a long way to securing themselves as a genuine playoff contender, and it would also keep their momentum high.

Our final highlighted matchup for week 3 may be a surprising one to some, as MNM Gaming and NYYRIKKI both find themselves in the bottom half of the standings for the time being. NYYRIKKI are currently winless as of the end of week 2, but after their matchup versus Team Singularity on the first day of week 3, it’s possible that they will be entering this game on the back of their first win. MNM Gaming meanwhile showed up big time in week 2 after a disappointing week 1, whether NYYRIKKI has a chance to establish themselves in the playoff race may well come down to which version of MNM shows up.