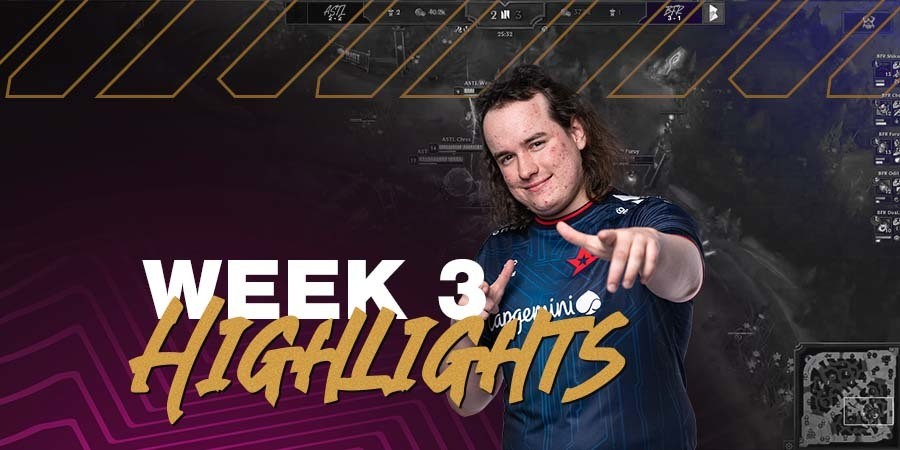 posted by Jacob Hancox,
If you missed week 3 of Division 1 of the NLC, or if you simply want to relive some of the coolest moments, we've got just the list for you! Week 3 of the NLC Division 1 spring split provided a lot of intriguing matchups and thrilling games. In amongst all the chaos, the twists and turns and the banger games, there were also some excellent examples of high-level League of Legends gameplay. We’ve picked out a few of the best highlights of the week for your delectation, and we’ve also provided you with a little preview of what to expect in week 4.

Heading into their week 3 day 1 matchup, NYYRIKKI and Team Singularity were the only two teams in the division who were yet to find their first win. Obviously, that had to change in this game. For a while, things seemed close. The kill score was even as the game moved towards its 25th minute, but then NYYRIKKI support Abagnale saw an opportunity for a sumptuous engage. After he set them all up on Rakan, it was up to bot laner Azitor on Jinx to knock them all down. Fun fact: this wasn’t even Azitor’s only quadra kill in this game.

On the back of a very convincing pair of performances in week 2, MNM Gaming were riding high. However, it seemed to all the world that they were going to be brought crashing back down to earth at the start of week 3, as they were slated to play against the giants of Division 1, X7. Then, MNM managed to go toe-to-toe with the favourites through the early game, and at the 16 minute mark they flipped a switch with this magnificent series of ultimates from mid laner RoyalKanin on Vex.

25 minutes into the Astralis Talent vs Bifrost game, and both teams could be found posturing around the dragon pit. A few ults were thrown out, but neither team seemed willing or able to engage the fight. With Astralis up by just under 3k gold, the game was far from settled and both teams clearly knew that the next fight could prove decisive. Suddenly, Astralis Talent's jungler Taxer saw the slightest of openings, and with one of the cleanest initiations you’ll ever see, made sure the fight went the way of the Danes.

Sometimes, a game just belongs to one player. When X7 lined up against Dusty, the game belonged to their support player, Kasing. Playing Leona for the first time in the split, Kasing had multiple standout moments in the game. However, perhaps the most stylish of all was the sequence of events that started near the 9 minute mark, when Dusty tried to pull off a dive on X7’s botlane. Kasing was having none of it, and completely flipped the play in X7’s favour.

After the first week of the Spring Split, many would have looked forward to this game and assumed that it would be a battle to determine which was the second placed team in the league. However, the slide in form that Astralis Talent have suffered since then has turned this game into a very serious matter indeed. The squad will need to prove they have what it takes to bring the fight to a very strong JDXL lineup, or else they will fall to a lowly 2-5 record. Not only that, but this matchup is between the two academy squads in the NLC, with all 10 players no doubt being very keen indeed to show that they have what it takes to make it in, or to make it back to, the LEC.

Finnish outfit NYYRIKKI claimed their first win of the season last week in fairly convincing fashion against Team Singularity. This game against Dusty represents the next step for them. For Dusty, a loss here could have serious implications for their chances of making the playoffs come the end of the split. Both teams need to string some wins together soon in order to avoid being left behind by the pack, and NYYRIKKI in particular can’t afford to lose one of their, on paper at least, more winnable matchups.

Here we have another JDXL match, but this time the intrigue primarily surrounds one of the hottest up and coming teams in the division in the form of MNM Gaming. The UK-based organisation has taken some impressive victories since their struggles back in week 1, and they even came close to being the first team to upset X7. Ultimately, they couldn’t quite take down the divisional titans. With JDXL having established themselves as second only to X7, they would make a fantastic scalp to firmly solidify the promise that MNM has shown these last two weeks.