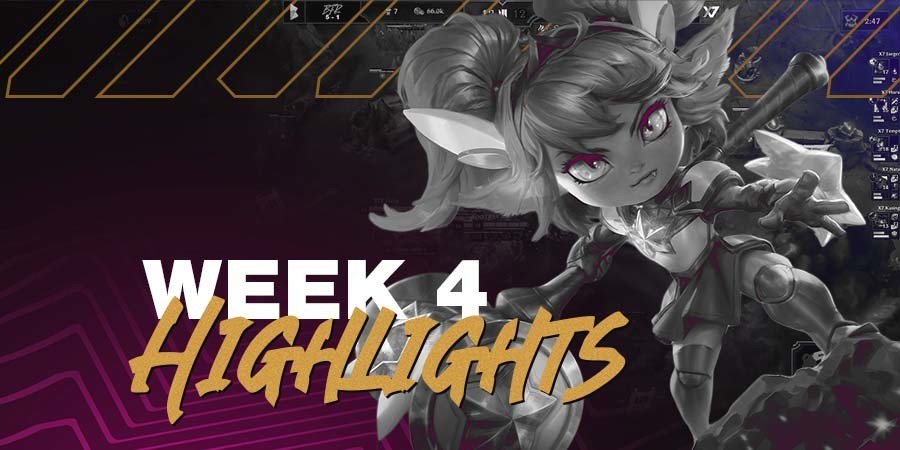 posted by Jacob Hancox,
Join us as we relive some of the best moments from week 4, and take a look ahead to week 5. Week 4 of the NLC Division 1 Spring Split was a bit of a wild one. We had some major upsets, the biggest two of which both involved Bifrost, some great teamfighting and, of course, some Kai’sa midlane gameplay. But which were our favourite moments? Find out here as we run you through four of the biggest highlight plays of the week, along with a sneak preview of what to expect in week 5.

In the very first game of the week, we saw 1-5 NYYRIKKI trying to claim their second win of the season up against a slightly healthier 2-4 Dusty. At the 33 minute mark, NYYRIKKI were on top, but a decent teamfight from Dusty left them with an opening to potentially claim an advantage. That is, until NYYRIKKI toplaner Petoska teleported back into the fight with full HP to absolutely eviscerate the remaining members of Dusty with a couple of nasty Gangplank barrels.

One of the most hyped matchups of the week was between Bifrost and X7. The latter were undefeated going into the game, having already seen JDXL earlier on in the split. Bifrost meanwhile had been quietly taking care of business with a 5-1 overall record. The game itself was surprisingly close, with Biforst even finding some early and mid-game advantages thanks in no small part to the Poppy of their jungler Cboi. After 36 minutes, they were knocking on the base of X7. Here’s what happened next.

Astralis Talent versus Riddle was the penultimate game of the week, and it was a match that held some pretty major implications. Astralis had been struggling since week 1, while Riddle hadn’t yet managed to sustain any positive momentum. As their game wore on, Riddle had the upper hand, but Astralis were still very much alive and kicking. As the clock ticked past 33 minutes, both teams were ready to scrap over the fourth ocean drake of the game. The fight that ensued left just one player alive. This high quality, back-and-forth teamfight is a sight to behold.

Heading into the final game of the week, MNM Gaming were coming in hot to challenge one of the strongest teams in the division, JDXL. However, JDXL’s coach Torok threw a spanner in the works before the game even began, when his team drafted Kai’sa for the mid lane. Off the wall picks like this one often work out, but rarely do they work out quite so immediately as what JDXL midlaner EMENES was able to pull off.


What’s Coming Up in Week 5

Coming off the back of a 2-0 week 4, which included an upset win over Bifrost, 3-5 NYYRIKKI have somehow managed to establish themselves as potential playoff contenders come the end of the split. One of the teams they might be hoping to overthrow in the playoff spots is Vanir, who are coming into the matchup on a cold streak having lost four of their last five games.

The timing could hardly be better for NYYRIKKI to try and upset Vanir and claim an especially valuable win. Vanir meanwhile will be hoping they can relocate their early season form and shut down the Finnish challenge before it truly begins.

MNM Gaming stumbled a little at the end of week 4 with a relatively convincing loss at the hands of JDXL. Nevertheless, the momentum they have built up since the start of the split is undeniable, and a win against Bifrost here could enter them into the conversation for the title of third best team in the league.

Bifrost are also licking their wounds after a disappointing loss against NYYRIKKI. However, in the game before that the Norwegian team became the first in the league to take down the mighty X7. The week 1 matchup between these teams saw a simple win for Bifrost, but MNM have come a long way since then.