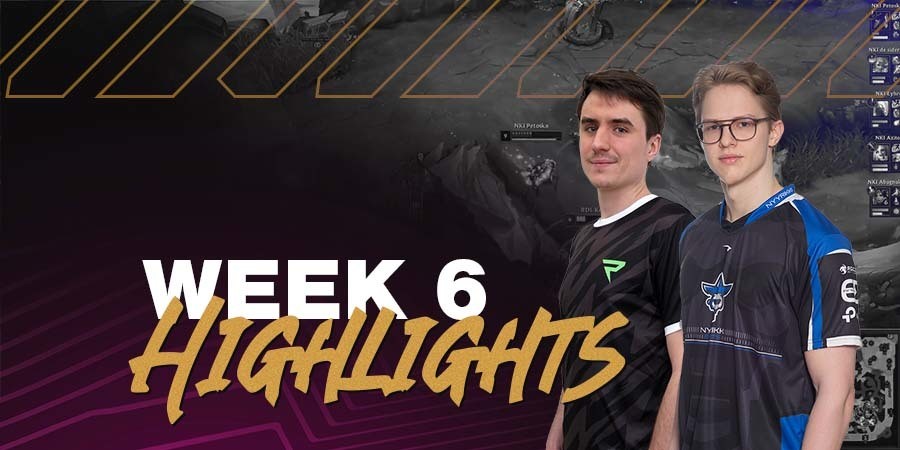 posted by Jacob Hancox,
Take a look at some of the best moments from week 6 of Division 1 of the NLC. Week 6 of the NLC Division 1 Spring Split has come and gone, and it provided us with one hell of a show! Not only did we get to watch the two titans of the league, in the forms of X7 and JDXL, duke it out on the Rift, but we saw a good deal of excitement in pretty much every single game. We’ve taken the whole two days of action and narrowed it down to the four most exciting and best plays we saw this week, just in case you missed them.

Our very first game of the week was one that most people didn’t have picked out as a hype matchup. Bifrost had cemented themselves as a top three in the division, while Dusty were struggling in the bottom half of the table. Sure enough, the early game started to go in favour of Bifrost, and when they initiated a gank on the botside of the map, it looked like their lead would only extend. However, FGG and Venzer, Dusty’s support and bot laner, seized the situation and flipped it on its head.

Later that same day saw a game between Riddle and NYYRIKKI, two teams on the edge of earning a playoff run. The stakes were high, but the game started off fairly slowly. With only four kills on the board at the twelve minute mark, toplaners Kektz and Petoska decided to inject a little more action into the game. Kektz had struggled until this point, with a 0-2-0 scoreline on his Renekton, and Petoska looked like he would get the better of his opposite number. But then this happened.

The second day of week 6 action saw a top of the table clash between JDXL and Bifrost, with major implications for playoff seeding being on the line. The battle ebbed and flowed in each team’s favour, and by the 29 minute mark JDXL held an advantage, but Bifrost were far from down and out. For a moment it seemed like the Norwegian squad might have turned the tables when they stole the dragon away, but all that did was give JDXL the opening they needed to route Bifrost and secure the game. In the fight itself, it was the engage from Kryze and the cleanup from EMENES that stole the show.

Team Singularity have been chasing their first win of the season to no avail so far. They have come close on one or two occasions, but none of their games looked as promising as they week 6 matchup against Riddle, where they secured themselves a solid early game advantage. Once the mid game rolled around however, some cracks began to show. After claiming a couple of kills, Singularity went to take the Baron, but Riddle’s jungler MC made sure to shut down any hope that remained of Singularity’s maiden victory.


Always stay up to date with the NLC