KDA, Solo Kills, KP%: Who Led Division 1 In Each Stat? 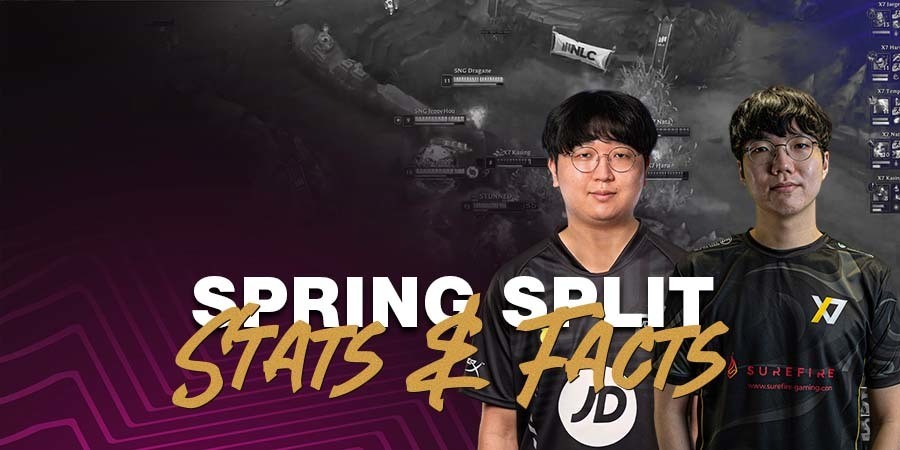 posted by Jacob Hancox,
After nine weeks of NLC Division 1 regular season action, the playoffs of the Spring Split are just around the corner. There is a lot on the line, with two spots at EU Masters to be fought for by the six playoff-bound teams. Now that the regular season is done and dusted, let’s take a look at the players who lead the league in certain statistical categories. Most of them are in the playoffs, so these stats will provide a little insight of what to watch for once the best of fives begin.

Let’s start with the big headline statistic that everybody loves to hate – KDA. For the three people in the world who don’t already know, KDA stands for ‘Kills, Deaths and Assists’ and is a way to determine the ratio of a player’s kills and assists compared to their deaths. While there are always accusations of certain players chasing KDA, and while it’s not the best measure of a player’s overall performance, it does tend to be the case that the best players end up with the best KDAs. So here they are.

Perhaps unsurprisingly, our literal 2017 World Champion Haru leads the way for X7 in this category. Following right behind is odi11, who has been less lauded than some other players in the league but has been a standout performer for Bifrost. This top five features two X7 players, two Bifrost players, and one player from JDXL. How’s that for balance?

Next up we have G/M, or Gold per Minute. This, as the name suggests, measures how much gold a player has received per minute of League of Legends played. This stat is valuable as it combines both a players farming efficiency (CS/M) as well as their income from other sources, primarily kills and objectives. It can also indicate which players on which teams are being spoon fed by their teammates to allow them to carry.

This is one of a few categories where JDXL’s star mid laner EMENES just eviscerates the competition. To reach 500 G/M is a massive achievement, as is indicated by the fact that nobody else comes close to the Korean. Notable here is Venzer, who as the split wore on increasingly became the main focal point for a rapidly improving Dusty roster. It’s also worth noting that odi11’s games as fasting Senna are not included in his figure.

Kill Participation, or KP%, is a measure of what proportion of a team’s total kills a player is involved in. If a team relies heavily on a certain player to make plays, or to carry, this usually shows up in them having a higher KP% than others in the same role. In general, it is supports and junglers who tend to be the highest performers in this stat, as their movement around the map in the early game means they are more likely to be present for any and all fights which break out.

First and foremost, the fact that both DuaLL and odi11 make it into this top five tells us a lot about the way Bifrost like to play with an especial focus on their bottom lane. However, the biggest outlier here is Chres from Astralis. The Danish mid laner is exactly 10% higher than anyone else in his role, with the next highest mid laner being EMENES from JDXL. Also note the lack of JDXL representation here – EMENES’ relentless solo killing tanked the Kill Participation scores of his teammates.

Damage per minute is a fun stat. In general, the most exciting players to watch will sit towards the top of this particular table. When compared to the G/M figure for the same player, D/M goes some way to indicating how well a player is making use of their resources. Of course, damage isn’t everything, but let’s just say nobody will be surprised by who takes the crown here.

EMENES’s D/M total of 813 is out of this world. In every region at the ERL, Wildcard and top tier levels, the next highest D/M for any player who has played more than 5 games is ordno, the mid laner for SINNERS Esports in Hitpoint Masters. His D/M is 758, over 50 damage per minute lower than EMENES's. In other, less earth shatteringly insane news, both of Astralis Talent’s primary carries made it into the top five, which is very surprising for a team which missed playoffs.

That’s a look at some of the most essential, core stats that make up a League of Legends player’s portfolio. However, there are a few more statistical outliers in more niche categories which are worthy of a mention.

First of those is, once again, EMENES. You may well be tired of hearing this by now but EMENES’s end of regular season tally of 34 solo kills is the highest in the league by a very wide margin. To make it even worse for nine of the teams in our league, the second highest total is 19 and that belongs to EMENES’s JDXL teammate Kryze. This is how you say “solo lane dominance” in stat-speak.

And that’s not all. Both EMENES and Kryze also occupy the two top spots for GD@15, a measure of how much more gold than their direct lane opponent a player has at the 15 minute mark of a game on average. As with solo kills, it’s not close. Both players average a difference north of 1000 gold in their favour at 15 minutes. Disgusting.

Let’s move away from JDXL now, and focus on a team who we have yet to mention here. Vanir are a playoff contender and a solid one at that, having recently become a member of the illustrious ‘we beat X7’ club. A driving force behind their success is their early game prowess, which is largely dictated by Noodle’s early ganks and pressure. This is borne out in the FB% stat, which measures what percentage of First Blood’s a player is involved in. With 61.1%, Noodle is the winner in this category, and the only player in the league above 50%.