"We don't have any real weaknesses": Kasing, Jaeger and Nata on X7 at EUM 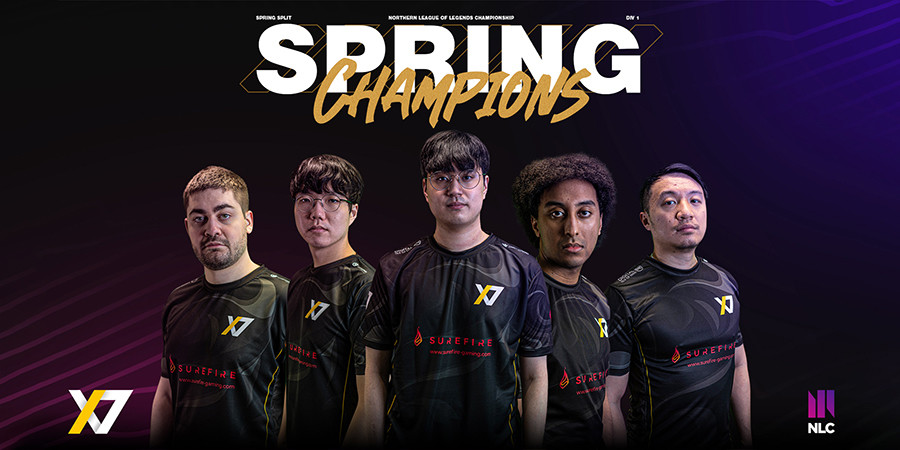 posted by Jacob Hancox,
After winning the NLC Title we had Kasing, Jaeger and Nata from X7 around for a short Interview, with a view towards their upcoming EU Masters charge. Together the NLC champions looked at their past season, how they developed as a team and who they are looking forward, to play against at EUM next week.

First of all, congratulations on your NLC Title. Looking at your new Roster, how did you guys develop as a team over the last season?

Before the finals I think, we were not that good, as a team, but looking at our performance on that day I think we played so well, we even surprised ourselves. I’m not saying the result was a surprise, I knew we were going to win, but I didn’t think it would be like that. If we keep playing like this in official matches, we are going to do very well.

Who do you think has the biggest influence on the way the team plays and therefore has a big role in your success?

I think the biggest influence is my jungler Haru. I have been playing with a lot of junglers, that were just not as experienced as Haru, young guys that were still developing. The last time I had an experienced jungler was with Xerxe in 2018. Having that again, is like a breath of fresh air. I can focus a lot more on myself instead of someone else. I can concentrate on myself more instead of always helping others.

It’s a good thing If you can trust your jungler, because he knows what to do, and Haru makes no mistakes, honestly. I feel like I’m in a blessed position, because I never thought to be playing with someone like him.

3-0 NLC. Finally I fucking win NLC after winning Superliga last split. Thankful for my teammates and coaching staff! LFL next? 🤪

Gg @Bifrost you guys will do well at EUM so don't sweat it.

Kasing, what sort of role do you play in the team outside of the rift?

I just try to check on everyone outside of the game. So, I don’t only talk to my ADC Nata, but I also check on Jaeger and our Korean players. I’m making sure they are fine, like if they have any problems, or if they think scrims weren’t going well or something could be improved.

Usually, Koreans are very conservative when it comes to criticism. They would never be upfront about it, even if you just ran it down. My philosophy for teams is just being brutally honest, not in a bad way but to a point, where we can all take something away from it, rather than keeping it in.

I have a pretty good relationship with Haru and Tempt, so it feels easier for me to integrate them into the team. I’m just trying to connect everyone no matter how good or bad its going.

How did Nata find his role in this roster full of big names and experienced players?

I just do what I have to do, and everything works out. I just have to do my job and since I have four very experienced players with me, they all do their jobs as well, and everything just falls into place that way. I don’t feel any stress or pressure because of it, I feel comfortable.

What did you learn from your veteran teammates until now?

Yes they helped me a lot. I am still inexperienced. They taught me a lot about macro and being disciplined, like recalling in time, not overstaying, getting tempo.

I just had to take that and use it in the official matches and that helped a lot.

Looking at the other European Regional Leagues, where do you see the NLC at EU Masters?

I think we are for sure below the average LFL-Team but at the same Level with the rest of the ERLs. In the Spanish league the bottom teams are actually better than our bottom teams, but the top teams are just the same.

I would say we are in third place. The French league is for sure number one on the list and Spanish is on second. The Spanish players individually are very good but don’t function as well as teams. I would put NLC and Prime League third.

The NLC is for sure behind the LFL. Some would say we are like third or fourth, but I think we can compete for second. I feel like the overall level of the NLC got better the last few seasons, that I haven’t been here. I would say the NLC is second.

Who are you looking forward to playing against?

I would like to play against K-Corp, because my old jungler 113 is playing there. We still talk quite regularly. I think it would be very fun to beat him because I can make fun of him.

In terms of teams, LDLC. Just because they are the best.

How far do you think you can go in the coming EU Masters?

We can get pretty far, but we definitely have a lot of things to fix. If we can find fixes for our current problems we can easily go to the Semi-finals, if not further.

I really don’t want to jinx anything. Every single time have gone to EU Masters I’ve been top eight. I always lost in Quarterfinals, and I don’t know if its because of me, am I just bad? Am I just top 8 support for the rest of my life? Or maybe its this year where its going to be different.

I have played on so many rosters over the years and there have always been gaps or weaknesses. This time is probably the first time I have a big hope that we will do much better, because we don't have any real weaknesses.

Thanks to X7 and the players for the interview, and best of luck to them on the European stage!

We take down @Bifrost 3-0 in the @NLClol Finals and secure our Group Stage spot at @EUMasters!

Thank you to everyone who has cheered us on and shown support for the team.

We now have a new trophy in our sights.#X7GG 🔥 pic.twitter.com/gUDDajle24