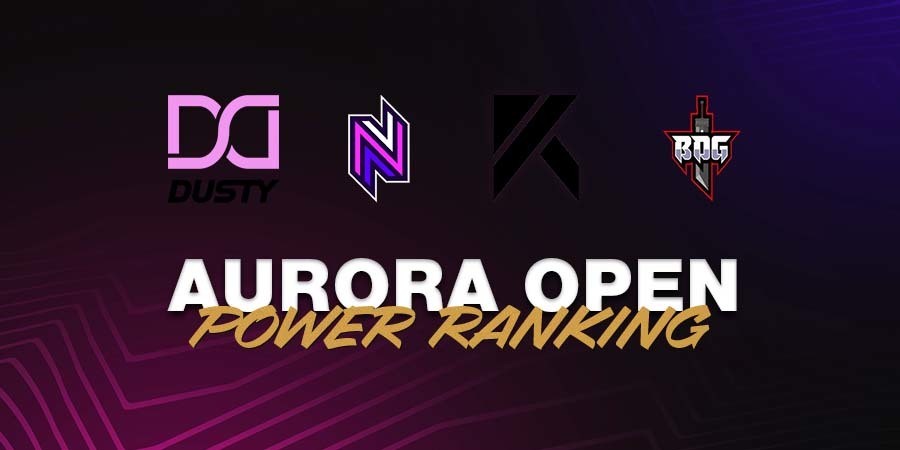 posted by Jacob Hancox,
The NLC Aurora Open groups are finished, and the Round of 16 is just about to begin. Here are the current power rankings of all 16 teams which remain in the competition.

One of the biggest success stories of the Aurora Open so far, Hydras started the tournament as one of the least favoured underdogs. After narrowly squeaking through the qualifiers and into the group stage, the Danish organised provided a shock by emerging on top of not one, but two different division 2 organisations.

We finish our @NLClol Aurora Cup groupstage with 3-3 record and advance further in the tournament!

Shit performance by me today after an unfortunate group of exhausting events but maybe this explains it a bit. My team smurfed when it meant the most💙

See you in the playoffs!!🔥 pic.twitter.com/OYZKfDbIOF

Admittedly, both Lucent and XAL were rather out of sorts, with roster instability effecting both. Nevertheless, Hydras have done very well so far, but it’s nigh-on impossible to envisage a world in which they take down Dusty in a best of three. As such, their Aurora Open road will likely come to an end on Wednesday.

PLAYING AGAINST THE BIG DOGS NOW.

ITS THE FA CUP.

LETS TAKE IT THE DISTANCE.https://t.co/fa7SJG7zXT

The two division 2 teams in question, Munster Rugby Gaming and Guarp Gaming, had both undergone drastic changes since their Summer split showings. Furthermore, while they were able to get the upper hand over Bifrost on social media, the same could not be said for their matches on summoner’s rift. A distinctly tougher matchup against a full-strength Astralis Talent awaits them now.

Next up we have the last remaining closed qualifier team in the Aurora Open: 42 Gaming. The Danish team proved their value in the competition by upsetting their division 2 opponents from across the Øresund, Lundqvist Lightside. Granted, LLS were playing with a new jungle-mid combination, but they made an impressive scalp for 42 nevertheless.

Their reward for their troubles is a best-of-three against division 1 team Bifrost. While it is true that the new Bifrost roster haven’t yet truly had their mettle tested, it still seems like a real uphill battle for 42.

After finishing fourth in the division 2 summer split playoffs, Domino’s roster remained mostly stable. However, the one change that was made was their Jungler, which can often cause a team’s entire identity to shift.

With their Romanian tandem of new boy OmulFinn in the jungler and the ever-aggressive 2Axes in the bot lane, Domino are a feisty team that have the potential to knock over a few apple carts. However, two losses to Nativz and another to closed qualifier team Bastu 5 doesn’t inspire massive confidence in the team. At least for them, NYYRIKKI is a decent matchup.

Though they have already guaranteed promotion to division 2 for the spring 2023 split, Verdant entered the Aurora Open on a division 3 ticket. Naturally, two losses in group stage were expected, as few expected anyone to be able to scratch Dusty. However, a further loss to Blade Edge tarnished Verdant’s group stage somewhat.

We had some close games to qualify for the @NLClol Aurora Cup Playoffs but WE DID IT!!!!

Tonight we face JD @excel to continue our streak! See you on the Rift @toroklol

However, a vibrant, creative and flexible playstyle, particularly when it comes to the draft, means that Verdant are a prime candidate to spring an upset on one of the big dogs. Unfortunately for them, they will have to face off against a veritable St. Bernard in the form of JDXL.

It has been a year of few ups and many downs for Team Singularity. After their second 10th place division 1 finish in a row, the Danish team could only muster a paltry 1-6 record in the promotion tournament. Thus, their relegation to division 2 was confirmed. Now, they are playing without Scroody in the jungle, who provided a sorely needed spark in the line-up towards the end of summer.

Despite this, the org showed some fighting spirit in the group stage by taking down NYYRIKKI in one of their two games. However, the inconsistencies remained, as Singularity dropped a game to an otherwise-winless Viperio. A rematch against Nativz, the team who took their spot in division 1, is a juicy prospect indeed.

KAOS e-sport provided another interesting twist in the Aurora Open group stage. The division 3 team handled a full-strength division 1 line-up, in the form of MNM Gaming, with relative ease. They defeated the marshmallows in each of their matches against them.

This impressive showing, combined with roster stability from the division 3 summer split, mean that KAOS look like perhaps the biggest surprise of the Open so far. Unfortunately for them, they will be suiting up against an in-form Riddle outfit in the round of 16.

RATE Gaming are fresh from an excellent summer split in which they achieved a second-place finish in the division 2 playoffs. However, everything outside of mid and jungle have been changed in their most recent games, and roster instability and a lack of synergy can always cause problems.

In their group, RATE did everything they needed to do. By sweeping both division 3 teams in their group, while in turn getting swept by division 1’s Riddle, RATE provided us with the most predictable group of the lot. However, with a round of 16 series against X7 looming, RATE will need to buck this trend.

Place 8-1: Check out the second page!