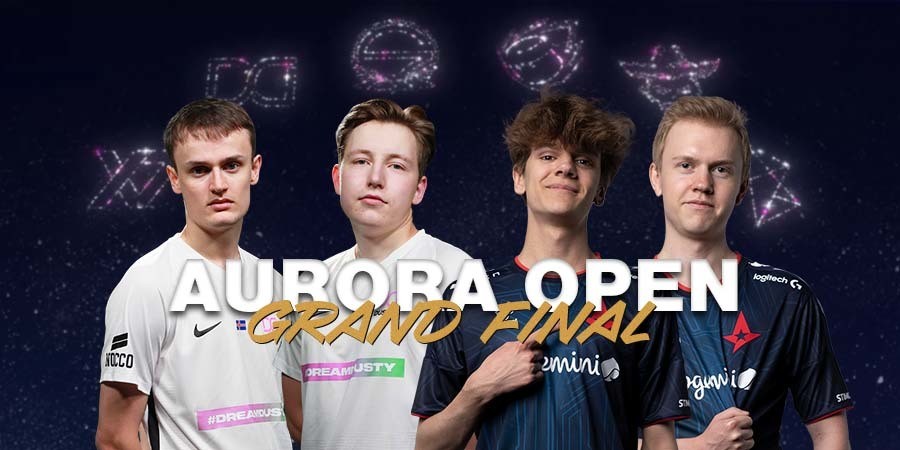 posted by Jacob Hancox,
Over the course of 137 games of League of Legends, the NLC Aurora Open field has been whittled down from 32 to just 2. This Sunday, 13th November, those two teams will battle it out for the title. Here is everything you need to know about Dusty and Astralis Talent in advance of the Aurora Open Grand Finals.

Dusty is one of the four teams who have been a part of the NLC since it began in 2020. However, that doesn’t mean the Icelandic team has always found success here. Their first two years in the league were rocky to say the least. Over the course of the three splits that comprised 2020 and 2021, Dusty limped along to the tune of a miserable 9-27 record (excluding relegation tournaments).

However, 2022 was the year everything changed for the team in pink. Spring was a strong step in the right direction; eleven wins in the regular season and two dominant 3-0 victories over Vanir and Riddle in the playoffs was enough to bag 3rd place overall.

A repeat of this success in summer was far from a guarantee. Roster upheaval left Dusty retaining only one player from spring in the form of Jonathan ‘Backlund’ Bäcklund. The Swedish midlaner became the centrepiece of the new summer roster. Dusty took a risk on a young rising star, the Lithuanian jungler Linas ‘Lyncas’ Nauncikas.

Around this promising mid-jungle tandem were two regional veterans Kallon ‘Kerberos’ Ram up top and previous NLC champion Nikolaj ‘DenVoksne’ Meilby in the bot lane. The latter was paired with Paul ‘Stend’ Lardin of France to round out the roster.

Several experts had Dusty picked out as a potential contender for summer before the split began, but nobody realised just how strong they would be. Gambling on Lyncas paid dividends and then some. The star jungler led the team to first place in the regular season with a 14-4 record and a 10 game winstreak to round out the split.

Two five-game series in the playoffs, first against JDXL and then against X7 in the finals, left the Icelanders feeling the heat. Nevertheless, they brought it home and claimed the NLC Summer Split title.

After having struggled in 2020 and 2021, Dusty are now the team to beat in the North. Dusty’s run to the Aurora Open finals has been nothing short of dominant. In particular, the comfort with which they handled Riddle in the semi-finals showed that they have lost nothing of their summer supremacy.

The academy team for the LEC organisation, Astralis Talent was first formed at the end of 2020. They spent 2021 competing in regional Danish leagues, to some modest success. After that, they first entered the NLC at the start of the 2022 season.

Their roster for their first NLC split, Spring 2022, was comprised entirely of Danish players. Chres ‘Sencux’ Laursen, the ex-LEC midlaner who competed at the League of Legends world championship in 2022, was the headline player for the team.

Alongside the decorated veteran were three players who also had plenty of experience in the NLC region. Christian ‘Taxer’ Jensen in the jungle, along with Lars ‘Chrisberg’ Christiansen and Daniel ‘Wendel’ Wendelbo in the bot lane, made for a strong, experienced core to the roster. Completing the team was the youngest player in the NLC, an up-and-coming talent in the form of the 16-year-old Carl ‘Carlsen’ Carlsen.

Despite what seemed like a playoff-calibre roster, Astralis Talent stumbled out of the gates in 2022. Any initial promise shown in the first few games of spring quickly vanished as other teams improved. By the end of the split, Astralis Talent had failed to reach playoffs with a 6-12 overall record.

Even though they could have, the team didn’t panic in the face of what could reasonably be described as a disastrous debut NLC performance. They held true to their philosophy, and retained four of their five players for the summer split. The only roster change was the arrival of Batuhan ‘Kibah’ Kibar to replace Wendel at support.

With this largely unaltered roster, Astralis Talent quickly silenced their critics at the start of the summer split. New coach Jonas ‘Vandett0’ Jensen was able to steer the ship in the right direction, and the Danes quickly racked up the wins. Entering the final week of the regular season, Astralis Talent held an outside chance to finish first place in the standings. However, a two disappointing games, including one against Dusty, left them fifth instead.

After yesterday's banger, the #NLC regular split has ended, putting us in 5th place. We are proud but still far from achieving our goals. However, we are ready for the playoffs!

We will face off against @RiddleEsports in the first round. 💪 pic.twitter.com/dg7DgjFH9a

Nonetheless, this was enough for a playoff berth. There, Astralis Talent comfortably handled Riddle, before being clean-swept by X7. The Danish team had come on leaps and bounds since spring, but they still weren’t able to mix it with the best the NLC had to offer.

Heading into the Aurora Open, Astralis Talent were expected to be a solid team, but few had them reaching the finals. They didn’t listen, though, and a narrow 3-2 series victory over fellow academy team JDXL granted them the right to prove once and for all that they are a roster who are capable of winning the NLC. If they beat Dusty on Sunday, Astralis Talent's spring and summer split demons will be exorcised.